Kinchol is very famous insecticide in Japan. It’s in steel can and to spray it to insects mainly to mosquitoes and flies. ‘Kinchol’ in Katakana words and rooster as trademark of producer Kincho are written on white and blue can, which is very famous design in Japan.

‘Kinchol’ is very helpful item, especially in summer in Japan !

History of ‘Kinchol’ in Japan

The producer, Kincho started sales of ‘Kinchol’ in 1934. It was atomizer with liquified insecticide in glass bottle. In 1952, ‘Kinchol’ with aerosol spray was released, which was first aerosol insecticide in the world. Kincho make comical TV commercial every summer, which is tradition of Japanese summer.

‘Kinchol’ is famous as long seller products in Japan !

Variety of Products of ‘Kinchol’ in Japan 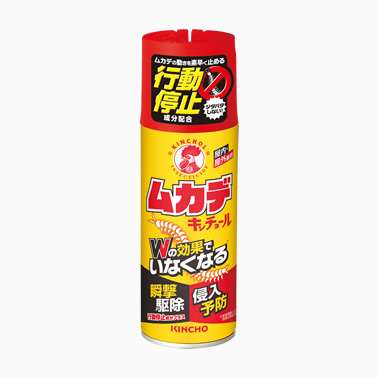 There are many kinds of ‘Kinchol’ in Japanese market. There are three types of Kinchol for mosquitoes and flies, standard Kinchol, Kinchol with rose scent, unscented Kinchol. Other than that, Kinsho provides Kinchol for various targets, for ant, centipedes, stink bug, etc.

‘Kinchol’ is available against various insects

Kinchol is very famous product in Japan. We can get it in supermarkets, drugstore etc in summer. Actually I bought Kinchol in this summer, however, it’s in the back of closet. Because we don’t see mosquitoes in winter.

What is Mushuda ? | Commentary by Japanese webmaster | Common in Japan #40

’Mushuda’ is very famous long seller product in Japan. This page is guidance of 'Mushuda' by Japanese webmaster !

Bufferin | Most Famous painkiller in Japan, Guided by Japanese webmaster !

Let's get knowledge of 'BUFFERIN' as very Popular painkiller in Japan, with guidance by Japanese web master !

Let's get knowledge of 'Rohto' as very Popular Japanese Brands, with guidance by Japanese web master !